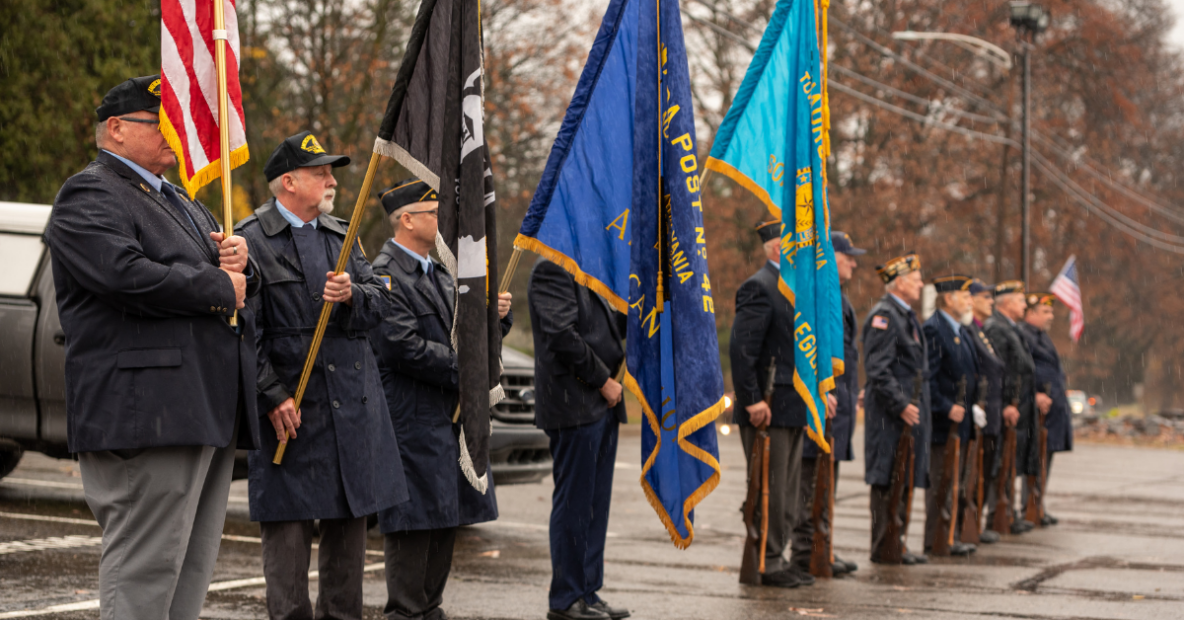 WYSOX, PA (November 11, 2020) — In a year unlike almost any other, Flynn Energy’s annual veterans appreciation celebration went off without a hitch.

Scheduled to begin at 11 am at Flynn Beverage in Wysox, there was some doubt as to whether Flynn’s 7th annual veterans event would draw anywhere near the same numbers it had in previous years. With the pouring rain and the country deep into a pandemic, the numbers could have been excusably thin.

“Every time I come to this event I get chills,” said marketing consultant and good friend to EJ Flynn, Ryan Scaife. “I don’t know why it is. We come up to help organize this event every year, and even on the way up this year I saw the rain and with everything else going on…I had some doubts. But the locals we love to see every year showed up, and so did our friends over at AMVets.”

In previous years, Wysox and Towanda Fire Co. have coordinated to have a fire truck pull up waving an American flag; a scenic and awe-inspiring backdrop to the veterans celebration. While they could not make it this year, the AMVets came out in large numbers–more than in previous years–to bless the event with a 21-gun salute and poem reading, even in the downpour.

“We haven’t been able to have our other events this year with Covid,” Flynn propane manager and Navy veteran Shawn Sullivan said. “We are deeply involved with our community and wanted to highlight our many staff and local veterans with some food and friendship. This event is important to us, and to this community.”

EJ Flynn gave the opening remarks, thanking his staff–many of which are veterans–local veterans, and the community for supporting the event. That was followed by a 21-gun salute and poem reading by Towanda’s AMVets.

“In a normal year, we would have had our customer breakfast and golf tournament, so with those being cancelled, it was almost a must to have this event, “ Flynn said. The bad weather almost always seems to follow us on Veterans Day, but luckily our friends and veterans never seem to mind. We really appreciate them coming out and supporting us.”

Flynn Energy would like to thank their employees with veteran status: