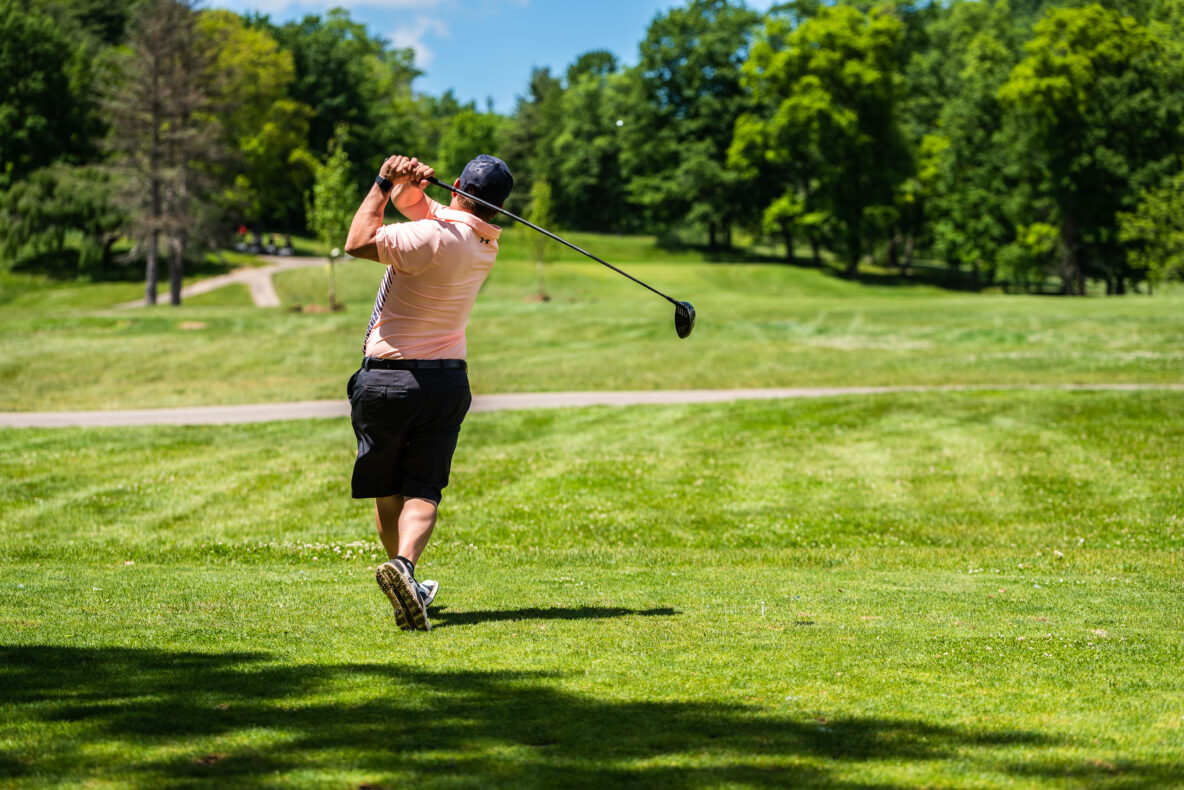 Towanda, PA (June 4, 2021) — When Flynn closed ceremonies on its 9th charity golf tournament two years ago, nobody thought they’d have to wait 727 days before teeing off once again. But that’s exactly what happened after the global pandemic put the tournament on hold.

All of that was forgotten on the morning of June 4th, when a cheerful EJ Flynn, staff, tournament sponsors, and golf teams tee’d off at Towanda Country Club.

With more excitement than usual, they were ready for the fairways and greens, good food, and the opportunity to support a local organization. This year the benefit raised money for Child Hunger Outreach Partners (CHOP) in Towanda, a local organization whose mission is to eradicate childhood hunger through food pantries and community action. In total, Flynn raised $16,000 and Stevensville Auto Body donated $4,000 for a grand total of $20,000 raised for CHOP. According to the organization, that amount of funding will allow CHOP to send home 20,000 weekend bags of food to local students.

“I can’t tell you how good it feels to be back,” said Flynn, who started Flynn Energy back in 2008. “It’s difficult for me to even put into words how important it is that we support our community. My staff, the club, and our incredibly generous sponsors know the value of this. It’s all about the people we help. This year it was CHOP, and it was an honor to support them today.”

The 10th anniversary was a big one, led by platinum level sponsors Williams Companies and Oil States Energy Services.

The day began with a traditional gun salute performed by veterans from the Towanda VFW Post 1568, followed by some opening remarks from EJ Flynn and club owner and PGA professional, Joe Acla, who outlined the rules for the tournament scramble.

Beers Auto ATV/Pine Grove Trucking took home first, followed by a team from Allison Crane. Midland Asphalt and Beauty and the Beard followed in a tie for third.

CJ Walters won the 50/50 raffle, a total of $600 and donated it back to CHOP. William Blaisure and Neal Wayne won a rifle and shotgun, respectively. Matt Lee, part of the winning team, also won a Yeti cooler in the cornhole contest.

In skins, winners Stevensville Autobody and Beauty and the Beard won a total of $1,250, donating it all back to CHOP.

In a very generous gesture, Stevensville Auto Body, sponsor of the putting contest, donated $4,000 to CHOP as the day’s activities came to a close.

Flynn began a new tradition on its 10th anniversary with the “Broken Club Award”, represented by a broken club head and awarded to the last place team. With a laugh, it was presented this year to a team from Consolidated Resources.

Flynn Energy is a locally-owned commercial fuel, residential propane and heating oil, and lubricants company located in Towanda, Pennsylvania. They service Bradford, Susquehanna, Tioga, Chemung, Sullivan, Schuyler and Wyoming County. Owner EJ Flynn and his staff are dedicated to the community, providing events throughout the year that seek to engage, uplift, and support local individuals and organizations. For more information on Flynn’s annual golf tournament or other events, stay tuned to www.flynn-energy.com and the Flynn facebook page.

review us on
See All Reviews